I had planned to do the Outlaw Full Distance Triathlon in July, and sadly this didn’t happen. But its not all bad news…..

January 2nd I embarked on a new diet to try and kick a few pounds off my weight to make training etc easier. I opted for the Ketosis Diet combined intermittent fasting.

For those of you who are not familiar with the Ketosis Diet, I have put a link at the end of this post for further details, but in a nutshell it is cutting out Carbs and it worked for me.

My goal was to loose 50 lbs by the end of the year, and I did that easily by the middle of the year on the Keto diet whilst only eating between 12pm – 8pm (a rule I stuck to about 80% of the time).

I have a blog post up about the Keto diet and what it meant for me, which you can find here. I hope it helps others make a decision about their diet choice, you don’t have to necessarily be training for triathlons to get some (I hope) value from it. As the post deep dives into the effects it had on me, I have kept the diet related info brief below, so to find out more details head over to the other post when you have finished this if you have not already read it.

Switching diets meant for me less energy whilst in the gym. For the first month I had such low energy compared to what I had, and this was most noticeable during my Personal Training sessions. My PT understood, and did a excellent job at modifying my workouts to work around my lack of strength and energy. Most of all he kept me motivated. One of the

With my reduced weight I was finding running and cycling easier, after I have kicked off a good few pounds I went out cycling and right away felt the benefit to lugging less weight up the hills etc. I was faster everywhere, and the hills were just easier. Strava was lit with PB’s. Great I thought!

As the rides and runs got longer, and the PT sessions got more intense, I was finding I did not have the energy I used to have. Although I was quicker, I could not maintain it beyond a couple of hours. Being on the diet was awesome in some respects, not so great in others.

To cut a long story short, one day I had a 50 mile ride planned, and the Outlaw Full was just around the corner – I could not face getting on the bike. I knew I would not have the energy to complete the ride, and had zero motivation to even attempt it (if I got stuck somewhere I would struggle to get back I thought). So that was crunch time, I decided 2018 would be about the weight loss, and not about the race that the weight loss was for.

In hindsight I probably could have done things different, but anyone who has been overweight knows bouncing around your head does when you just want to keep seeing those scales go down. I had gone from 44 to 34 inches jeans (44″ was before I started training at all, not 2018!), lost about 50lbs of weight and was scared to risk it by changing my eating.

I kept the training up but not with the intensity I should have done to continue to build my fitness, but I did keep the diet up by and large, sure I slipped sometimes but I did continue to steadily loose weight.

Leading upto xmas, the parties were being organised and the mince pies were in the shops, I did relax with what I ate and drank, a little too much if the truth be told, and the issue with eating habits such as I have got is you can easily get stuck into a rut – it doesn’t matter if it is Keto diet or No diet, I tend to stick to whatever I am doing and its not great to be honest sometimes.

I intend in the new year to do the Ketosis diet for a short period, then change diet’s to something that is more suitable to the training level I intend to achieve. I also intend to keep up with posting onto the blog, and I will also be putting some youtube videos up, but not of training. Head over to youtube to subscribe – https://www.youtube.com/channel/UCaCAUiTanMCH8_BAk6weyzQ

If you have not already I recommend reading the post about the Ketosis Diet, Intermittent Fasting and Training For An Ironman 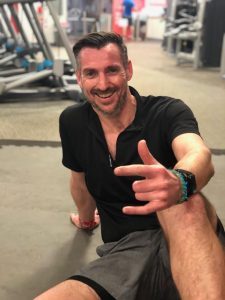 Hi, I'm Rob, sometimes called "The Flying Cheeseburger" (I'll explain that later). Although it's not my life's ambition to take part in a Ironman, it's certainly something I've got my sights firmly set on. And although this blog is called "couchman2ironman" I'm not always on the couch! Read More Here